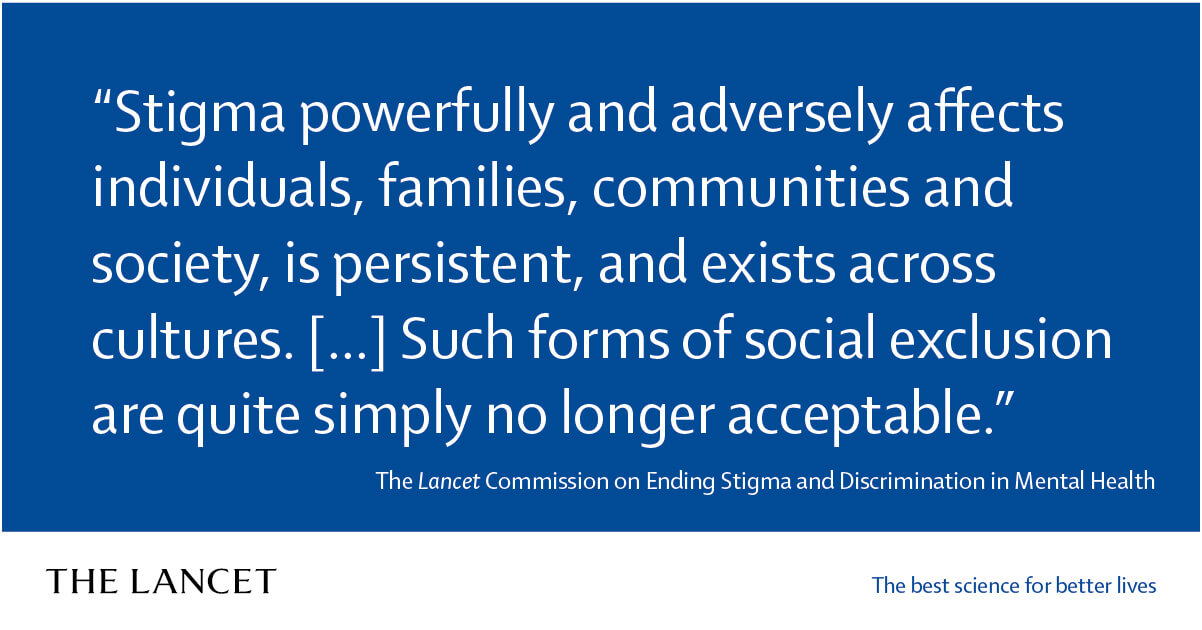 New research unveils that stigma and discrimination against people with mental health conditions in the media is a ‘global human rights crisis’ – that at its worst can lead to suicide.

The new Lancet Commission on Ending Stigma and Discrimination in Mental Health launched on Oct 10, for World Mental Health Day 2022.

This first of its kind research includes the voices of people with mental health conditions in its investigation of the role of media in stigma and discrimination, as well as in developing recommended solutions.

Alongside testimonies and contributions from people with lived experience, the Commission has reviewed the evidence on effective interventions to reduce stigma and calls for immediate action from governments and international organisations, employers, healthcare providers, media organisations and people with lived experience to work together to eliminate mental health stigma. 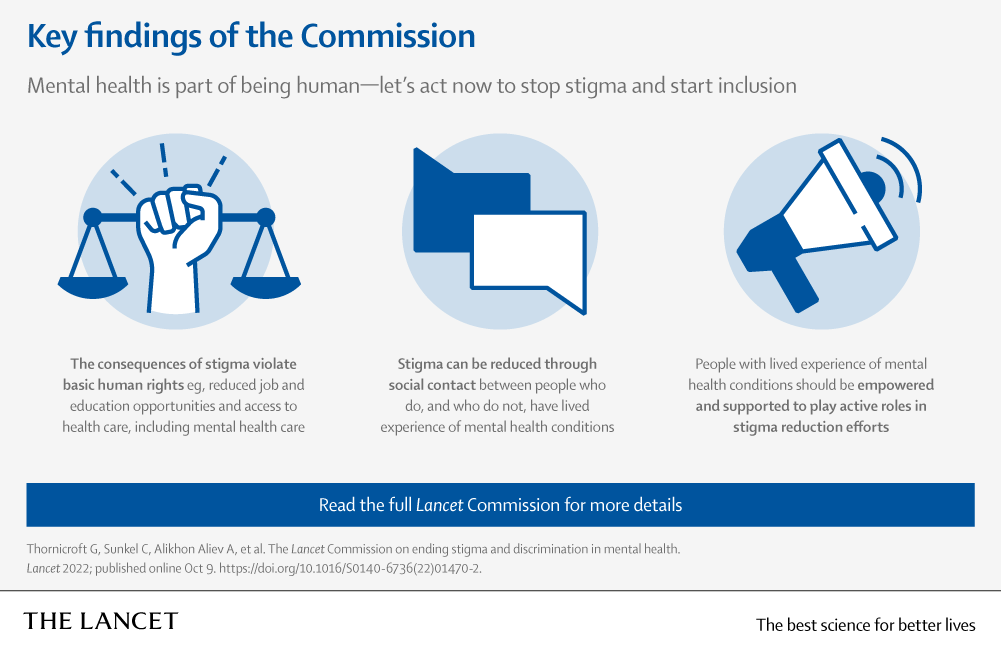 The report, launched on World Mental Health Day – which this year had the theme ‘Make mental health and wellbeing for all a global priority’ – puts a spotlight both on the damage media is causing, but also the actions that can be taken to tackle and help end stigma and discrimination. 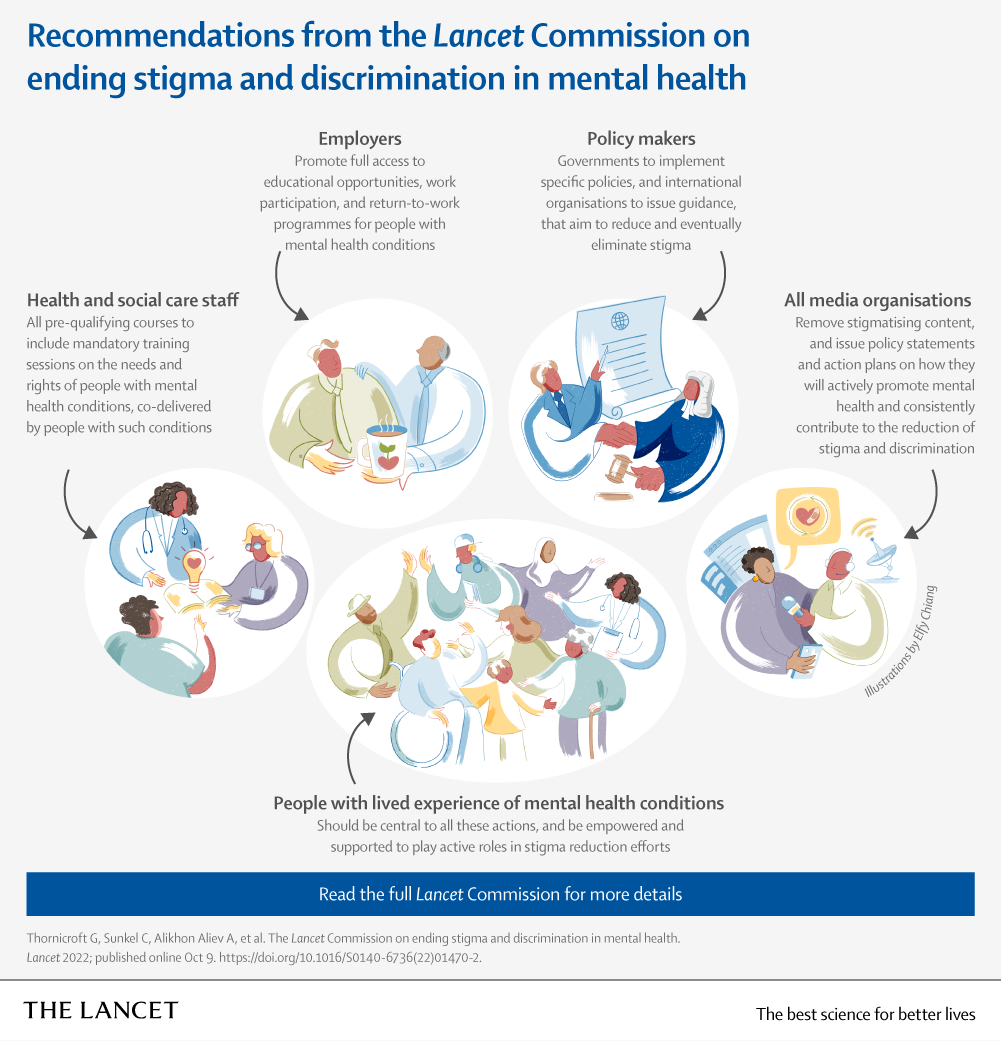 Download the full report, and replay the online launch event, hosted by the WHO, below, which is translated in French and Spanish.

Poems from people with lived experience of mental health conditions

Our response: A new Media Manifesto to End Stigma and Discrimination in Mental Health

In response to the Lancet Commission, United for Global Mental Health and the Global Mental Health Peer Network are now calling on media outlets and journalists themselves to sign up to a new ‘Media Manifesto to End Stigma and Discrimination in Mental Health Media’, to combat stereotypes and commit to accurate and sensitive reporting.

The Lancet Commission for Ending Stigma and Discrimination in Mental Health shows that careless media reporting contributes to stigma and discrimination, which bars people from reaching their full potential, harms their mental health further, and at worst contributes to suicidal behaviours.

Our media call to action is based on recommendations in The Lancet Commission and the testimony of people with mental health conditions, informed by a global survey of people with lived experience.

“This is more than a mental health crisis, it is a human rights crisis“, said Charlene Sunkel, Founder and CEO of the Global Mental Health Peer Network, Co-Chair of the Lancet Commission report.

Professor Sir Graham Thornicroft, the other Co-Chair of the Commission report, of the Centre for Global Mental Health at  King’s College London said:

“Media around the world must commit to fundamental change to actively  reduce stigma and discrimination in mental health.”

“An important part of tackling the stigma and discrimination around mental health in the media is advocates within the media itself who can help educate their colleagues and begin to address – and change – the negative bias that persists”.

“The media has the power to challenge stereotypes and normalise mental health conditions through reporting that creates greater societal awareness and support.

This new report fromThe Lancet is an opportunity for the media to reflect and take the lead in achieving better mental health for all.”